Rome, May 15th, 2017 – On Wednesday, 10th May 2017, in the framework of Transport Logistic 2017 in Munich, RAM hosted the “Adriatic-Ionian Logistic Corridor” Conference aimed at presenting to an international audience of private and public stakeholders, the CEF-cofinanced ADRI-UP Project and its contribution towards the improvement of Motorways of the Sea services along the Adriatic-Ionian corridor in the eastern Mediterranean basin. 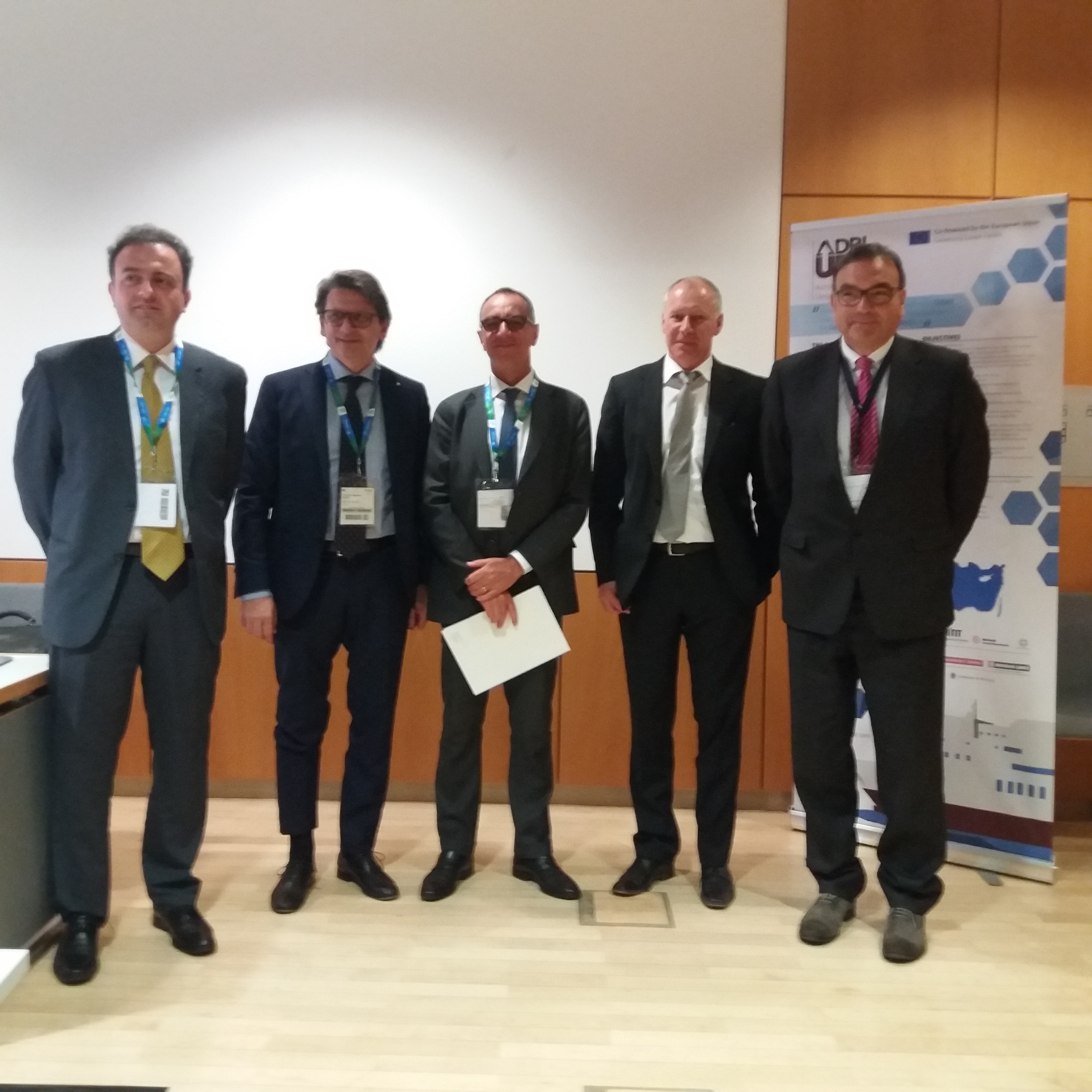 Transport Logistic is among the world’s largest sector fairs and it offers the optimal scenario for disseminating the ADRI-UP objectives, as it gathers sector stakeholders from all over the world, but specifically from central and northern Europe, which represents the main catchment area for freight traffic moving along the Adriatic-Ionian corridor. In that context, RAM hosted an open public conference, presenting the ADRI-UP project and its main objectives to the qualified audience attending the fair. The project, through the planned infrastructure upgrading in the Ports of Ancona, Trieste, Igoumenitsa and their respective inland terminals, aims at increasing port capacity and improving the connectivity between the main Adriatic-Ionian logistics hubs linking four out of the nine core corridors of the TEN-T network: Scan-Med, Bac, Med and Orient-East Med. The planned interventions will make the connections between the ports and their respective hinterland more efficient, thus fostering the concentration of freight and passenger traffic along the Adriatic-Ionian corridor, which is among the most used for freight traffic within the eastern Mediterranean area, but still under capacity, though.

The conference was moderated by Mr. Konstatinos Grinias, coordinator of the ADRI-UP project, and the panellists, representing both institutional and business sectors, illustrated their expectations and plans toward the improvement of the Adriatic-Ionian logistics corridor, through the smoothly integration of maritime transport into a more efficient and sustainable intermodal logistics chain.

During the first session of the conference, Mr. Alexio Picco, Managing Director of Circle Touch and advisor to the EU MoS Coordinator Mr. Simpson, illustrated the main objectives of the EU transport policy in the maritime sector, in particular with regard to the finalization of the MoS Detailed Implementation Plan and the financial opportunities offered in the MoS priority of the CEF Transport Programme, as well as the results achieved by some relevant Actions already selected for funding in the previous CEF Transport calls (e.g. Fresh Food Corridors Action). 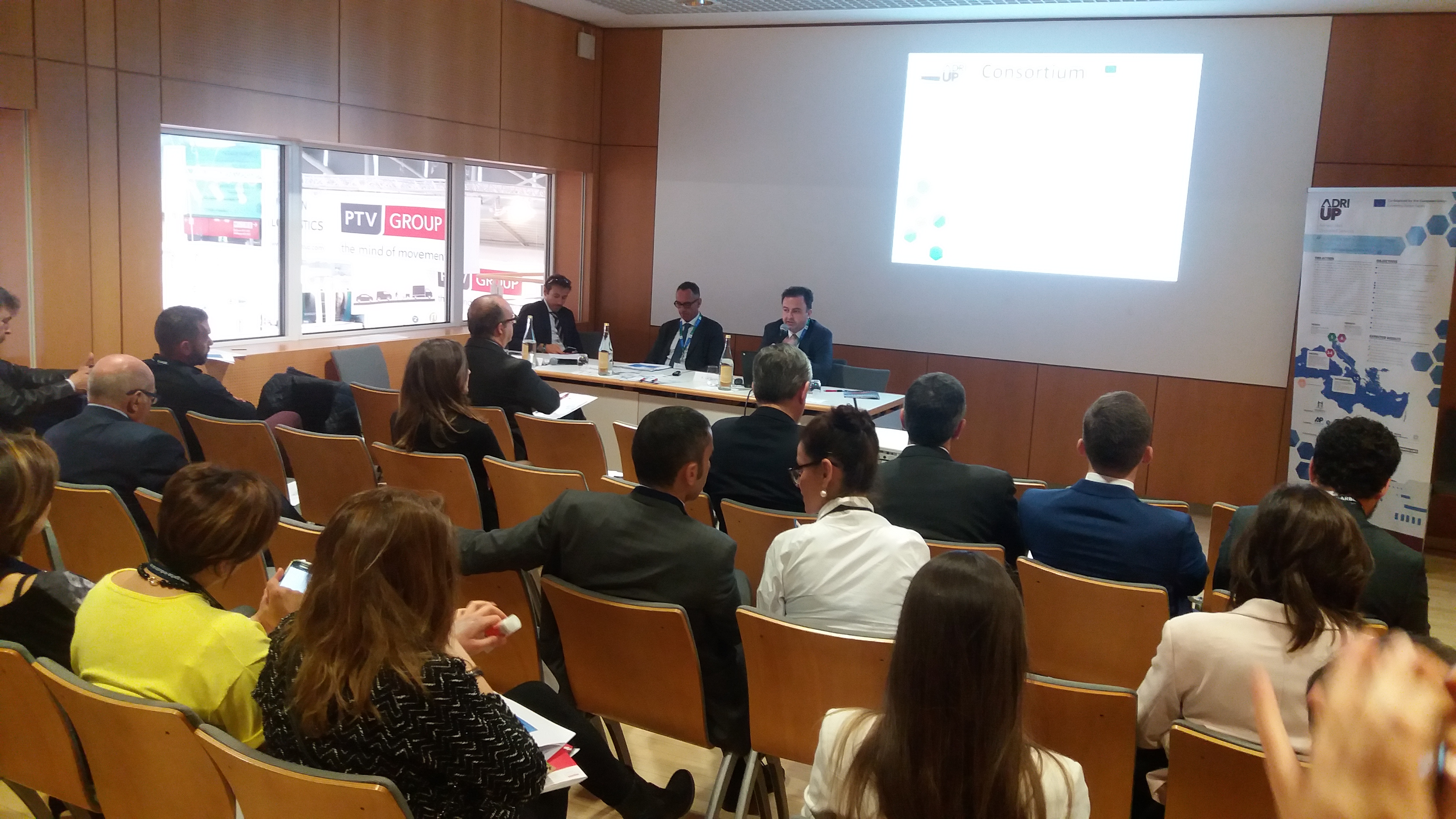 Later on, Mr. Prof. Francesco Benevolo, Managing Director of RAM focused the attention to the EU Macroregional Strategy for the Adriatic-Ionian Region (EUSAIR), supporting the economic and social development of the area and exploited the synergies between EUSAIR and ADRI-UP. The first session of the conference was then concluded by Konstantin Grinias, who illustrated more in depth the ADRI-UP actions, including: the construction of the Igoumenitsa Freight Village and of the road link between IFV and the Egnatia-Odos highway; the technical studies for the upgrading of railway infrastructure and for the new Ro/Pax terminal in the Port of Ancona; the restructuring of Pier VI in the Port of Trieste and the railways connection upgrade of Interporto di Trieste.

In the second part of the conference, an effective dialogue took place during a round table between private operators and the representatives of the Port Authorities and logistic nodes involved in the ADRI-UP project . More specifically, Mr. Zeno D’Agostino, President of the Eastern Adriatic Port System Authority, Mr. Guido Vettorel, Representative of the Central Adriatic Port System Authority and Ms. Shirin Mahdavi from Interporto di Trieste, illustrated their development plans and strategies, including the investments foreseen in the ADRI UP Action. Mr. Nunzio Savarese of Grimaldi Group, Mr. Spyridon  Paschalis, Managing Director of Superfast Ferries as well as Mr. Armin Riedl, CEO of Kombiverkehr, illustrated the main maritime and intermodal services provided in the area, highlighting the strategic importance and the positive traffic forecasts within the Region. To this regard, in order to enhance the Adriatic Ionian basin role as main entry/exit gateway area in the Mediterranean Sea, serving northern and central European markets, the participants agreed on the need to cooperate among private and public actors, as well as to foster railway connections in the logistic nodes. 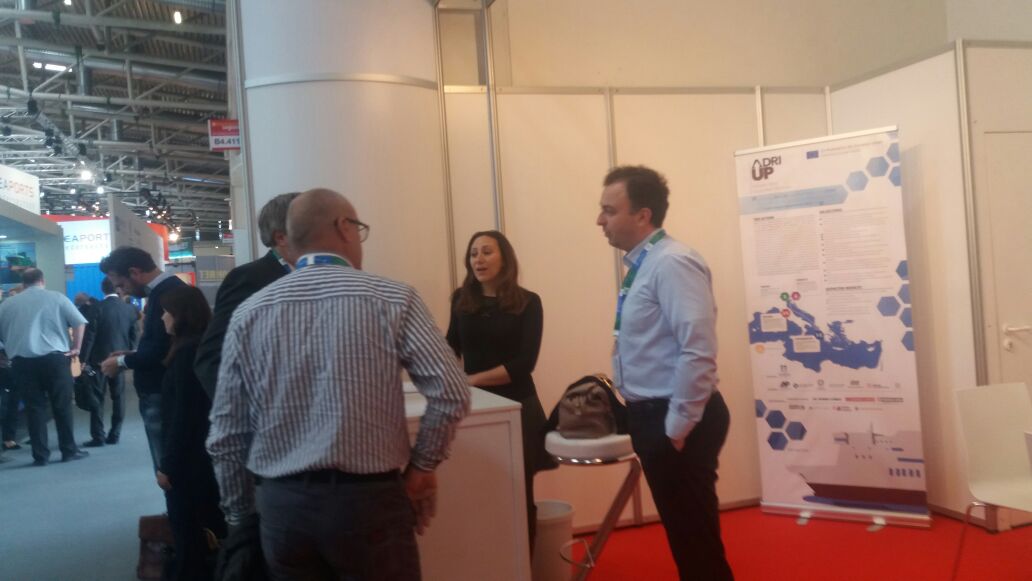 During the 4-day exhibition in Munich, the project also had its own booth in the exhibition hall where dissemination activity was carried out among the fair visitors, offering individual insight moments on the project’s activities.